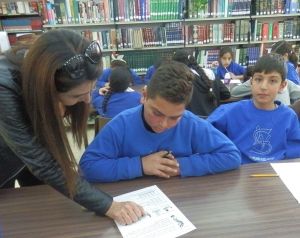 The Pontifical Mission Library-Bethlehem, which started in 1970 has ceased from just being a mere library, and rather has evolved into what it is now as, Pontifical Mission Educational and Cultural Center. It is one of the projects financially supported by the Pontifical Mission for Palestine, springing forth from a fundamental motivation of contributing to the educational, social and cultural growth of the Palestinian/Arab community.

aIt is serving both Christians and Muslims, young and adult alike from Bethlehem with its three refugee camps: Aida, Azzeh and Deheisheh as well as its neighboring cities like Beit Jala, Beit Sahour, Beit Safafa, Abu-dis, Jerusalem, and even Hebron including as well other nearby towns and villages.

Being a center, it aims to respond the changing needs and demands of the different age group levels of our members/non-members through the varied quality educational and cultural activities where respect, tolerance and dialogue among diverse cultures and religious beliefs are being encouraged and concretized, thereby promoting a wholesome interpersonal relationship and solidarity with others.