Home/Completed Projects, Our News/PMECC Awarding Ceremony for the Final Round of the Reading Competition for 14 Elementary Schools in the Bethlehem Governorate 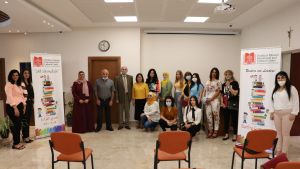 The alarming spike of cases of the corona virus, the risk and threat posed lately to people’s health specifically in Bethlehem and its neighboring areas did not deter the organizers and participants to hold simultaneously the Final Round of the Reading Competition and later on the Awarding Ceremony. This event was held on August 12 and 19 respectively at the Pontifical Mission Educational and Cultural Center. The PMECC administration and staff, teachers, and students overcame their fears as they braved the threat and risk of the possibility of contracting and spreading the virus, by attending the last part of the contest. It was postponed for three times already in the past due to months-long lockdown.  With these latest surge of the new cases of people getting infected with the virus, the PMECC Administration and Staff took extra care, adhered to health protocols and precautionary measures that were issued by the Ministry of Health.

This year-long project which was enthusiastically participated in, by the 4th and 5th graders from fourteen (14) government and private schools was launched last September 2019.   It is the first reading competition ever participated by various schools in the Bethlehem area and its neighboring cities. An encouraging number of students who initially participated and logged in at the beginning of the contest reached to 800 while the total number of books read during the given time reached to 12,276. What a remarkable performance engaging young people in such a worthwhile endeavor. 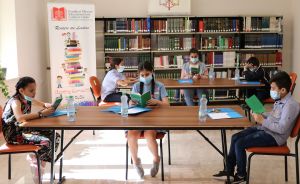 One of the upsides of the pandemic lock down was the creative response of the Staff to place all books on-line for the participants’ easy access. The participants rose to the challenge and persevered in reading more books online.  Hence, teachers and parents noted some positive changes on the students’ improved reading and writing skills. Furthermore, they underscored growth in their love for reading, an increase in their vocabulary, thereby improving their skills in critical and creative thinking.

Students were required to read one-hundred (100) books provided by PMECC to each of the participating schools. Participants went through three rigorous elimination rounds, which left only 20 student-participants to compete with each other.  The final round took place simultaneously in two batches, where the efficient team of judges – consisting of Mr. Mahmoud Odeh, Head of Educational Technology of the Ministry of Education-Bethlehem Directorate; Professor Qustandi Shomali of Bethlehem University ; Ms. Nadia Bany Shamsa, Director of Vincent Malham Center for Arabic Language, and Mr. Philip Daoud, Asst. Vice President for Information Technology Services at BU,  individually corrected the summarized works of the participants who accumulated points and were eventually declared winners.

The event concluded with the Awarding Ceremony which – because of the pandemic –  was limited only to the coordinators, directors, and the student winners who got the three major prizes. It was graced with the presence of the Mr. Bassam Jaber, Mr. Mousa Yaghmour and Mahmoud Odeh, Deputies of the Ministry of Education – Bethlehem Directorate, on behalf of Ms. Nisreen Amro, Director; Mr. Joseph Hazboun, Regional Director, and Gabi Kando, Project Coordinator, both of the Pontifical Mission Office in Jerusalem, to whom we owe our heartfelt gratitude for their unwavering support and encouragement. 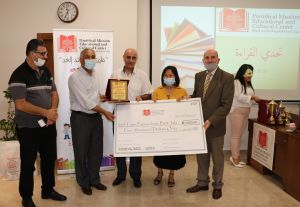 During this event, the winners were honored and greeted with warm congratulatory wishes as they received cash prizes and other incentives from the organizers. The Latin Patriarchate of Beit Jala bagged the Winning School Award, as they got the highest percentage of participants who qualified up to the Second Round of the competition.  The three major prizes awards went to the following students from three different schools namely: First Prize Winner– Hala Hamdan of the Rosary School; Second Prize Winner-Salma Rahal of St. Joseph School and the Third Prize Winner-Lojain Salahat of Al-Khulafaa’ Elementary School for Girls. Special prizes were also given to twenty (20) students who made it to the Final Round. Likewise, each of the forty-seven (47) participants who completed reading the 100 books gained a medal.  In general, this activity helped the students develop their full potential through reading as well as boost teachers’ efforts and school performance.

This pioneering event of the PMECC would not have been a success without the joint cooperation, support, time, and efforts invested by the school directors, coordinators, parents, students, PMECC staff, donors and benefactors.  The hard work done behind the scenes and the seemingly quiet and ‘boring time’ of staying or working at home brought about by the lockdown, were translated into more productive moments for the student-participants, teachers and organizers who undeniably did a great job. All these was evidently motivated by the great desire to develop the students’ full potential and to accompany them in their educational journey.

This activity is just one of the many things we can thank God for.  They are countless blessings bestowed upon us through people, situations, ideas which were acted upon, opening possibilities of growth as well as showing us the difference we can make in the lives of others.

We are, indeed, reminded that we are just God’s mere instruments.  May our lives continue to give thanks to Him whose loving presence has been a constant source of inspiration in our giving, sharing and serving God’s own people, as more joint partnership and continued cooperation with other schools and prominent institutions for this kind of educational endeavors are now in the horizon.